Canadian jazz singer and pianist Carol Welsman’s excellent reputation is no accident. Album after album, the lady delivers quality product, tastefully executed by seasoned musicians. Each time, though, the element that stands out the most is her vocal performance. Warm timbre, affecting interpretation, accuracy… Her work is impeccable! …

For Canadian born, six-time Juno Award nominee Carol Welsman, one of the deepest autobiographical albums in her treasured jazz canon is her 2012 masterpiece Journey, in which she expressed her passion for traveling and multiple cultures. Throughout her storied, 30-plus year career, she’s become a true citizen of the world, jazzing fans everywhere from New York and Tokyo to Italy and Brazil. She’s also lived for years in France, Italy and LA and speaks and has sung beautifully in multiple languages. …. 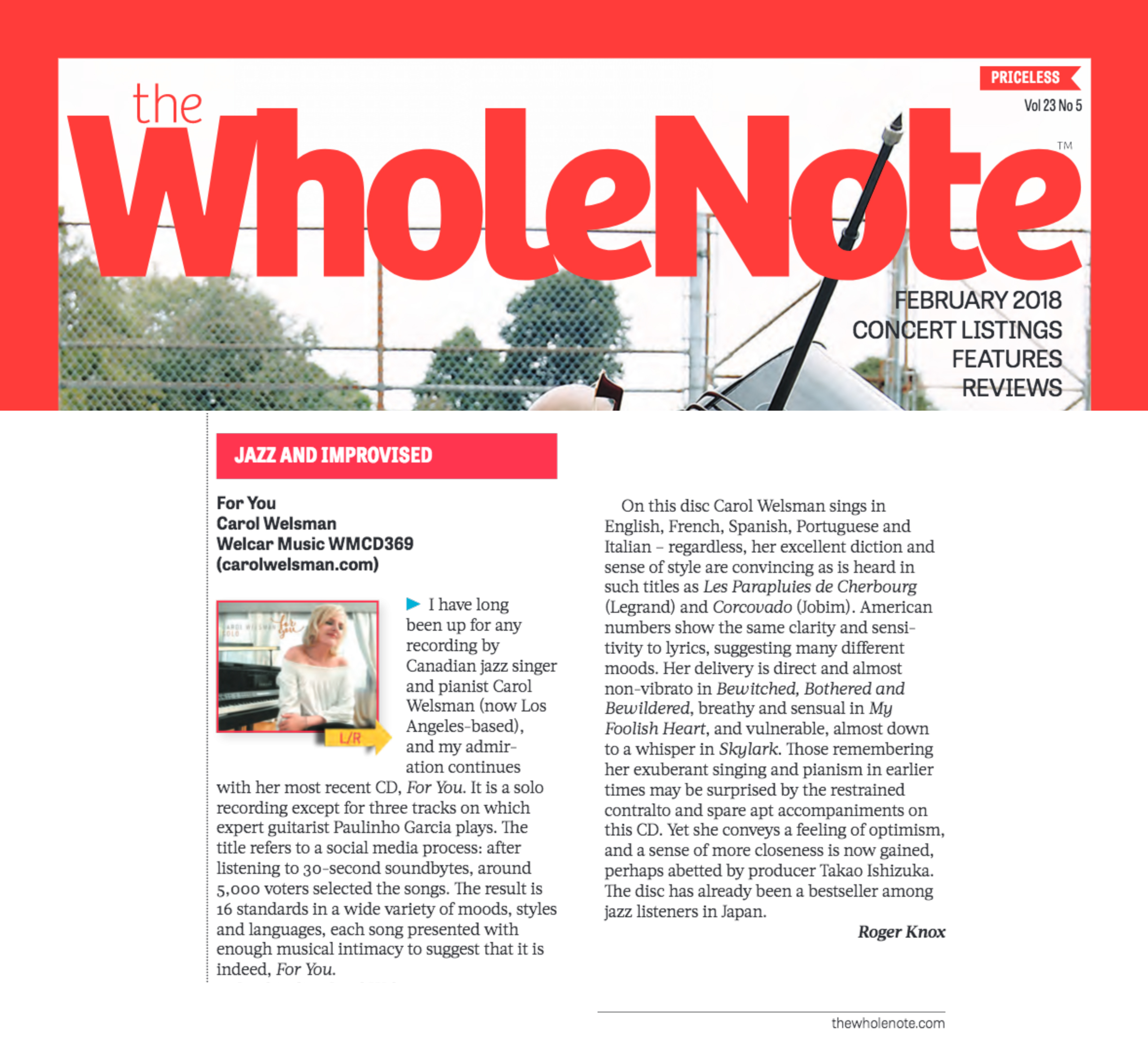 Canadian vocalist Carol Welsman, a six-time Juno Award Nominee, turned to her fans on social media to help select the tracks for this sweetly evocative new album. In an online event spanning Facebook, Twitter, Instagram, and her website, Welsman provided 30-second sound bites of 23 solo piano/vocal tracks recorded by Japanese producer Takao Ishizuka in 2016 and asked her online following to vote for their favorites. The top 15 songs selected by voters became the program on For You.

The resulting album is an intimate affair spanning songs in multiple languages, including Spanish (“Besame Mucho”), French (“Les Feuilles Mortes”) and Italian (“Ti Guardero Nel Cuor”). But the bulk of the material is drawn from the Great American Songbook, and Welsman takes to classics like “Skylark,” “The Shadow of Your Smile” and “My Funny Valentine” from angles of adoration and invention. Her voice – satiny and emotive – drapes magnificently across the contours of “My Foolish Heart,” which she adorns with delicate clouds of piano, while on Carpenters-associated “Close To You,” she casts soaring wordless vocals into the carefree, windswept melody.

CAROL WELSMAN/For You Solo: The great jazz vocalist may not have made the record she’s always wanted to make, but after letting fans vote for what they wanted to hear her sing, she’s made the album they wanted her to make. Up close and personal with just her and her piano, this is the classic cabaret album you have to grow into before you can make it sound as good as this does. This is a real career defining set. Killer stuff throughout.

Carol Welsman says she hasn’t been out West in a long while. It’s an odd thing to say for someone who lives in Los Angeles.

But the six-time Juno Award-nominated, self-managed jazz vocalist puts it in context: “I’ve lived in California since 2003, in a glorious place on top of a hill with beautiful views very close to the Santa Monica Mountain Wildlife Area. Beautiful. I’m from Toronto and I do still work more in that part of the country, rather than Western Canada. So it’s good to be coming back to B.C. with an album that I’m really excited about.”

That album is the well-reviewed Alone Together. It’s a collection of fresh takes on standards and not-so standards that were recorded in New York. It also features bassist Rufus Reid, drummer Lewis Nash, trumpeter Wallace Roney, guitarist Jay Azzolina and percussionist Steven Kroon.

Why did she choose to work with a New York City crew when she’s on the other coast?

“Although it once was, L.A. is not a jazz town, it’s a movie town,” Welsman says. “As I found out from a few Grammy-nominated friends of mine, there is still quite a stigma about New York being where the real jazz is. My producer wanted me to do the album there, so that I could come full circle back to strong jazz roots and be seen being that way.”

Besides the new album, Welsman is celebrating another career milestone: She is a decade cancer-free. After getting a clean bill of health from her oncologist, she decided to go public with the news she had kept under wraps from almost everyone but her closest family members and a small coterie of trusted confidants.

“I went for a biopsy and the doctor said he would only call if there was a problem, and he rang me as I was heading on stage to perform at the Winnipeg Jazz Festival,” Welsman says. “I’ve never done a concert that numb, and the long story short is that I was extremely lucky to have ductal carcinoma in situ, which is a pre-cancer that, if left undiscovered, turns into full-blown breast cancer.”

The brush with mortality was an eye-opener for the artist. One of the reasons she kept it quiet was because her father intuited that the word “cancer” could be misconstrued and blown out of proportion by bookers and so forth, leading to a loss of income. Welsman didn’t want people to think she might not be around to fulfil commitments.

“Cancer is a really nasty word in the entertainment business,” she says. “There is a lot of negativity around it and people can get things wrong.”

Welsman continued to work while undergoing light radiation treatment following her operation. As years passed, she became used to keeping the information quiet, even from siblings.

“As time went on, I learned to leave the stress on the back burner and focus on what matters,” she says. “We didn’t have cancer history in the family and I sort of believe that the always on the go, constant stress of my chosen profession played a key role in me getting it. One of the reasons I want to talk about it now is the importance of early detection and how you have to make the time in your schedule to get the tests run.”

Standing up to be counted among the survivors feels good — as does going back to her traditional jazz roots on Alone Together.

Though celebrated for her Latin-tinged numbers, bossa nova and grooves, Welsman went another direction for Alone Together. For one song, she went back to the Berklee School of Music School, where she studied in her teens, and also launched into a heady exploration of jazz classics.

“The Charlie Parker tune Disappointed was one that a singer at the school performed in concert, and I learned it from her and then just left it,” she says. “I had this whole list of songs which had been done live over the years but never recorded and decided to pursue them. Also, I wanted songs written by jazz musicians, so there was the McCoy Tyner song or an Oscar Peterson song.”

Welsman has used her songwriting talents to pen pop tunes for singers such as Celine Dion, Ray Charles and The Pussycat Dolls’ Nicole Scherzinger. She is well aware of the tendency of vocalists to over-sing and keenly sensitive to jazz vocalists who sometimes go to great lengths to showcase their every chop in a single song. Alone Together benefits from her restrained, respectful takes on the material. Welsman is not about to sing a line without thinking about it.

“I remember when I was working with top-10 songwriter Romano Musumarra and had an important lesson in lyrics,” she says. “We were writing a song called Baby Come Easy for Ray Charles and it had a line, ‘I need you beside me/to hold me/to guide me,’ and he said there was no way that Charles would sing it because he was blind, and he was completely right. You really need to consider all these things in writing and performing.”