Though Carol Welsman’s lengthy career has been liberally dotted with fine albums, she reaches a lofty new plateau with Alone Together. It’s a well-traveled route. Many of the past century’s foremost jazz and jazzinfluenced pop singers didn’t find their sweet spot, their defining sound, until middle age—Fitzgerald, McRae, Sinatra, Tormé and Bennett among them. As with those masters, Welsman’s interpretive and stylistic maturation evinces a seeming effortlessness, an organic oneness with each song.

Welsman’s flowering extends to her scat skills, lightly but winningly exercised across a lithe “Day by Day,” and her deft navigation of the Eddie Jefferson vocalese masterpiece “Disappointed,” based on Charlie Parker’s “Oh, Lady Be Good” solo. With stellar support from bassist Rufus Reid, drummer Lewis Nash and trumpeter Wallace Roney, joined by guitarist Jay Azzolina on four tracks, Welsman divides the rest of her elegant playlist between sturdy chestnuts and less-familiar standards. Highlights among the latter: a shimmering treatment of Frank Loesser’s romantic Cuban travelogue, “Sand in My Shoes,” winningly accented by guest percussionist Steven Kroon, and “Killing Time,” Carolyn Leigh and Jule Styne’s heartrending ode to post-breakup loneliness. Least known among her 11 selections is “The Blues Are Out of Town,” a hip delight, crafted by the late (and underappreciated) singer-pianist Joe Derise, that Welsman resurrects with jubilant verve.

Canadian jazz pianist and vocalist Carol Welsman unveils her eleventh album as leader with the audacious Alone Together where she’s never alone and altogether very spicy and splendid on vocals as well as on the keys. The album contains a superb selection of time-honored standards like Sammy Cahn’s “Day By Day,” Rodgers & Hammerstein’s oft-recorded “It Might As Well Be Spring,” Duke Ellington’s classic “I Didn’t Know About You” and of course, the Arthur Schwartz/Howard Dietz 1932 title song, “Alone Together” among many others. A recipient of many Canadian Juno Awards nominations for several of her previous ten albums, Welsman, a former Toronto native, now embraces the standards from her new base and home in the Hollywood Hills central region of the City of Los Angeles.

The songstress adds her lush cushy vocals to a new interpretation of jazz and classic standards that comes off quiet well here especially, because she assembles an A-list of players that also provide their own imprint on the music making this a vocal jazz project bolstered by excellent instrumentals. Drummer Lewis Nash and trumpeter Wallace Roney are both pronounced on the opening “Day By Day” where bassist of note Rufus Reid also weighs in as the vocalist does some swinging scatting. Borrowing lyrics from the late great cabaret singer Bobby Short, Welsman belts out the song “Sand in My Shoes” with gusto with a little help from guitarist Jay Azzolina, and percussionist Steven Kroon.

Delivering a fresh new treatment of an old warn-out classic, the familiar title song undergoes a metamorphosis of sorts with Nash pounding the drums and the vocalist pounding the keys, some high-note reaching and more scatting in a great arrangement of the standard. One of the many beautiful songs on this disc is, “You Taught My Heart to Sing” where Welsman takes the Dianne Reeves lyrics and puts a new spin on it assisted by a humble bass line solo from Reid and some engaging guitar riffs from Azzolina.

The blues are in order on the swinging “The Blues Are Out of Town,” featuring some nice horn play from Roney, while Ellington’s immortal love song “I Didn’t know About You” is voiced softly and gentle as it was penned to be. Vocalist and pianist Welsman goes it alone on the Carolyn Leigh/Jule Stein finale singing softly and playing a tender chords befitting the tender tune “Killing Time.” For those who can appreciate the splendor of the standards, Carol Welsman’s Alone Together is an impressive vocal jazz album that captures the music of the ages and the emotions of love songs forged here by the rich lush vocals of a beautiful singer and a talented pianist all in the same person. 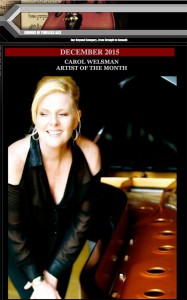 Carol was been selected as the Sounds of Timeless Jazz Artist of the Month, December 2015! Check out the full article here.

At least two of the other vocalists featured in this set of reviews are also trained pianists; however, only Carol Welsman actually plays keyboard on her album. It’s clear throughout her disc Alone Together that her vocal and piano styles are closely intertwined. On the opening track, Day by Day, she scats in unison with her piano lines, and the harmonically astute modulations in It Might As Well Be Spring could only come from a piano-centric musician. Yet on the first chorus of Sand in My Shoes, the piano temporarily retreats and we can hear Welsman’s flexible approach to rhythm and intimate delivery of the lyrics. Welsman’s audacious a cappella introduction to the title track is a virtual duet in itself as she alternates between lyrics and scat. She displays remarkable diction on Disappointed, Eddie Jefferson’s lyricized version of Charlie Parker’s famous JATP solo on Oh, Lady Be Good, breaks your heart with an intense reading of If the Moon Turns Green and swings with vigor on The Blues Are Out of Town. The slightly husky quality of Welsman’s voice might recall Diana Krall, but Welsman clearly offers more inventive approaches and interpretations than her fellow Canadian pianist/vocalist (incidentally, Welsman started her career in Toronto, but she’s lived in the Hollywood Hills for the past decade). Unlike the other CDs in this survey, Welsman traveled to New York to record her album, hiring the remarkable rhythm team of Rufus Reid and Lewis Nash (who are both in exquisite form). The underrated trumpeter Wallace Roney plays several fine solos on this album and guitarist Jay Azzolina enhances the rhythm section on three tracks, and plays superb obbligatos on the album’s best track, a vocal-piano/guitar/bass version of Duke Ellington’s I Didn’t Know About You. Alone Together is a superb introduction to Carol Welsman’s intimate vocal and piano style.

Carol Welsman is the beautiful, blonde and altogether superb Canadian jazz singer/pianist who is NOT Diana Krall. She calls this disc [ALONE TOGETHER] her “truest to the jazz art form to date” which, aside from the odd formality of the locution, is inarguable. That’s the kind of thing that will happen when your band is composed of trumpet player Wallace Roney, bassist Rufus Reid, drummer Lewis Nash and guitarist Jay Azzolina. She has her own way around a standard and always has. Her singing won’t remind you of anyone, unlike Krall who sometimes sounds like Joni Mitchell and sometimes sounds like Julie London.) She performs jazz musician favorites like It Might As Well Be Spring, My Ship and the freely conceived title tune, one of the most traditional of “jazz naturals” in the American Song Book. But outside that repertoire she is equally good too. And when she scats, she does it with lusty authority. Three and a half stars.

Carol recently chatted with CP24’s Stephen LeDrew about her new release, Alone Together. Check out the interview here.

Background uncovered us that workouts were useful for penisenlargement regarded as greatest Male Enlargement Methods. These Organic Enhancement Workout were used for a long time. Today, Just How To raise penis measurement to 9″ is straightforward. END_OF_DOCUMENT_TOKEN_TO_BE_REPLACED

Raised in a musical family in Toronto, Ms. Welsman has been a musician and singer since she was a child. After spending several years in Europe, she returned to Canada where her jazz career took off. A six-time Juno nominee and winner of Berklee College of Music’s Distinguished Alumni Award, the multi-lingual Ms. Welsman has just released her 11th album, Alone Together.

“I had such a great experience. Classes had a maximum of 20 students. In Grade 7, we read Homer’s The Odyssey and The Iliad. The subject matter was so advanced. The demands on excellence were very high. There was a lot of peer pressure. You had to test into school. In the beginning, I really struggled, but I soon caught up.

“There was a great sense of camaraderie, a sense of togetherness that I never felt at another school. There was a team effort, team spirit for everything. It stays with you for life.

“When I get up on stage, I don’t script my introductions to songs. I tell stories, make jokes. I credit the school for giving me the confidence to do that.”

As a cool September breeze pushes the mists of summer down the bay, ushering in a new season, Carol Welsman’s Alone Together — to be released Friday, Sept. 18 — freshens some old songs you know and some you may not have ever heard. And how good is that?

Good enough that Sammy Cahn is featured twice, opening the album with the classic “Day By Day,” with Wallace Roney’s trumpet floating under and around Carol’s vocal, and later with “You Taught My Heart to Sing,” music by McCoy Tyner. Carol would win on great taste if nothing else.

But there’s a lot else. Throughout Carol sings lead with both her vocal crystal clarity and her interwoven piano work. On another classic, “It Might as Well by Spring,” her stylish singing and piano share a love affair with a song. Balanced by the delicate strength of Jay Azzolina’s guitar solo.

Then here comes a song I didn’t know, “Sand in My Shoes,” a timely ode to Havana’s lure. Yeah, I don’t like the Castros but I’d sure like to see what’s left of Hemingway’s Boat.

The title song has an a cappella intro which makes me wonder how terrific it would be if she sang the whole song that way but, hey, who could object to her piano here with the terrific rhythm section of Rufus Reid on bass and Lewis Nash on drums. They’re good everywhere on the album.

Everything’s good here. Wallace Roney’s trumpet solo on “Disappointed” is even better than his solo on  “My Ship.”

“My Ship” is my favorite cut on the album, if anyone wants to know. I know. I have a weakness for Kurt Weill and Ira Gershwin but we all have our prejudices. Carol’s control of Weill’s so yearning self doubting lyrics is right on point. Pinpoint control in all places is one of the most notable qualities of her singing and piano playing throughout the album.

It’s a great strength but as an old merchant I knew once said: “What makes you strong can be your weakness sometimes.” The whole album seems so controlled, so measured, so skillfully managed, that I sometimes wish for a ragged edge, a few moments of abandon, a little feeling of improvisation.

This is essentially a jazz album after all.

Perhaps it’s Carol’s classical background that requires her to measure each note, each chord, each turn of phrase. European jazz often has that feel and just once in a while wouldn’t you like the conductor to leave the stage and just let the guys play?

But her strength is precise playing, sound arrangements, perfect song selection and, in the end, poignant emotion.

“Killing Time” brings an absolutely aching conclusion to the album. If you could hear tears, you would hear them in the spaces between the notes.